The Rigorous Road of a Traveler 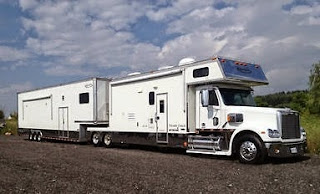 Ah yes, life on the road. Spectacular right? We hear it all the time from fans and new-coming racers. "I just wish I was able to follow (insert favorite national series here)."

Think back about 3 months ago to when we were all anxious for the racing season to get started as drivers of all shapes and sizes ventured down South for Florida/Georgia Speedweeks. "Who's following this series? Which drivers will we see at all of that series's races?"

As the month-long excursion takes place and each series breaks off down their respective paths, we begin to see drivers fall off the road, seemingly dropping like flies, one by one. As fans, some of us understand, whilst some rant and rave about how drivers/owners plan poorly, were in above their heads, or were silly for thinking they could make it out on the road. 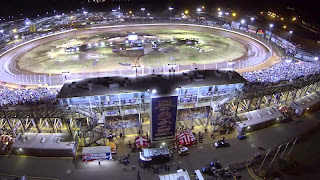 That's where we have to draw the figurative line in the sand. When taking into account all variables it's more remarkable that any driver can follow those series that everyone wants to watch. You know, those races that are a definite MUST-SEE when certain drivers are coming to your local track. The World of Outlaws Sprints and Late Models, and the Lucas Oil Late Models come to mind. The rejuvenated All Star Circuit of Champions and newly-formed National Sprint League are beginning to fit the mold also.

I won't feed you a load of crap. Much like every other race fan in the world, I have my favorites when a traveling series comes to town, and I certainly have those that I root against. But beneath all of that is a level of respect for the drivers, crew members, and owners that voluntarily take on this daunting task.

How daunting is it, you may ask? Well, here's some food for thought...

The WoO Sprints (admittedly the most extreme touring series in the world) began 2015 with right around 90 events on the schedule. Okay so what, that just means they get to race a lot. Right? An opportunity to win more money.

I'm going to throw a few numbers at you. The Outlaw schedule, encompassing 90+ races and nearly 10 months of time, requires 28,000 miles of travel from track-to-track. That's if the team never goes back to the shop, which we already know is impossible. Assuming they can get the toterhome up to the speed limit while climbing the hills of America, that's 430 hours on the road. Remember now, this is only if the team doesn't make a single trip to a hotel, restaurant or race shop.

430 hours = 18 days; That means that each team spends at least 18 days, or 5% of their entire year, just riding down the road to the next speedway on the schedule.

Let's continue on, shall we? What financial ramifications come with just getting to the track? We'll ignore racing equipment for the sake of time because we could go on all day about those ungodly costs. We'll be generous and say the average toterhome averages 9 mpg's. At the country-wide average of $2.90 for diesel, you're spending nearly $10,000 in diesel to get to the track. You might as well shove the smiles and winner's check of your first win right into the tank.

Emotionally and financially, just considering the trips to the track is enough to make people weak in the knees. Then, for the sake of the argument, consider a driver that has been struggling over span of a few weeks. All of the sudden the tire and car prep that's required to be competitive isn't fun anymore - it's pointless in their eyes, a waste of time.

We won't go any further into detail, but just consider the obstacles that you face with tires, worn equipment, crew members, owner's money...the list goes on and on.

There is more to following a tour than meets the naked eye. So next time you boo an invader, or write-off a driver and question there desire to race, consider what I've talked about.

Instead, display additional respect and gratefulness towards the drivers (and owners, crew, family, etc.) that continue to sacrifice so much to do what they love, and what we love to watch them do. Sometimes we take things for granted. Let's not let this be one of them. The next time you're in the pit area when a traveling series comes to town, take a few minutes to thank the guys that dedicate their lives to this.

It takes a special person to be able to take on such an endeavor, and for that they deserve our praise and gratitude.