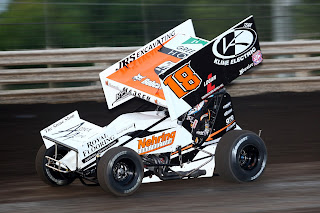 The biggest week in Sprint Car racing is almost here. The Knoxville Nationals is now just one week away, and the anticipation is at an all-time high. Can anyone steal the show from Donny Schatz, who looks to claim his 10th Nationals crown, and possibly also dethrone him from the top spot in our National Sprint Car Poll?

Dale Blaney found his way back to victory lane following a month-long absence en route to becoming this weeks' biggest mover, leaping forward eight spots to the No. 6 hole. Blaney held off charges from Sheldon Haudenschild, Danny Holtgraver, and others at Eriez Speedway to claim the All Star win.

Aussie native Ian Madsen rejoins the poll for the first time since early June following stellar performances during the National Sprint League's tripleheader this past weekend. Madsen's 4th at Jackson Motorplex and 2nd at Hancock County Speedway were impressive, but it was the team's win at Knoxville Raceway just before the Nationals that was the icing on the cake.

Parker Price-Miller, the youngster from Indiana, made his debut in the Top 25 after strong performances during the four-race Midwest Open Wheel Association (MOWA) speedweek. Highlighting the week for Price-Miller was a pair of wins at Quincy Raceways and Jacksonville Speedway.

Also joining the poll after a one week hiatus is Iowa's Terry McCarl. He piloted his No. 24 machine to win the NSL-sanctioned event at Hancock County Speedway as the teams gears up for next weekend's Knoxville Nationals.

The three drivers falling out of the Top 25 from last weeks rankings are Christopher Bell, Danny Holtgraver, and Logan Schuchart.

3. Daryn Pittman, 179 points
Recent Results: Kept it in the Top 5 in both nights of World of Outlaws action.
Previous Ranking: 3rd (NC)

9. Lance Dewease, 114 points
Recent Results: The team did not make a start this past week.
Previous Ranking: 5th (-4)

18. Brian Brown, 59 points
Recent Results: Managed a Top 5 in just one of his three starts over the weekend.
Previous Ranking: 13th (-5)

22. Danny Dietrich, 35 points
Recent Results: A 2nd place finish at Grandview was his only Top 5 over the course of the week.
Previous Ranking: 21st (-1)