Shane Andrews- A Study in Connectivity


It's a steamy summer weeknight at a dirt track somewhere in the northeast, or maybe even Quebec. The beer has been spilled, the 50/50 raffle has reached epic proportion, and the field has been whittled down, culminating in a moment, a place and time that you won't soon forget, the four wide salute.

You may have heard a million of them and can barely make your way to your feet as you begin to clap. Or you may be new to the practice and lose your voice screaming in the process.

Then suddenly, a man brings the microphone to his mouth, and delivers the following...

"Ladies and gentlemen, wave your hats, wave your baby, wave your neighbor, wipe your visor, adjust the five point harness, grandpa....take your viagara pill! As we get ready to go tonight, we salute you! Before they go fast and start to power slide, we salute you with the big blocks four wide. The ground pounding, earth shaking, window rattling, 800 horses without all the mess. The big block modified Super Dirt Car Series!"

He's got the confidence to deliver the message better than anybody. He should. He's got the crowd behind him, and he got them on his side by years of perfecting his craft and building relationships.


Announcers. They're the link between all track activity and the fans in attendance. They set the table for the night of racing yet to come, call the action on the track, give us insight to information on particular drivers and play a crucial role in bringing the sponsors to the forefront. It's not easy, and it should be regarded as an art form.

You see, there's this little thing called personality, and it seeps from the microphone to our ears. And it's a different feel from a fans point of view, between each and every announcer we hear. Some are very professional in approach, never stumbling over a word with precision timing. Some are less versed in professionalism and yet are so passionate and friendly that mistakes can be overlooked, and everybody in the stands understands completely. Some are a bit dull and make you wonder if you should check them for a pulse.

Shane Andrews has a pulse. He's also got the professionalism, passion and personality it takes to elevate his status to elite. The announcer of the Super DIRTCar Series Modifieds and the weekly announcer at Brewerton and Canandaigua speedways has a certain way about him that has his fans in his corner every night.


His style, makes him different, not just in the way he describes a race, but in the way he holds a crowd together, engages with the fans, and the sense of humor he invokes at almost every turn. There's a good many announcers that specialize in a little of all of those factors. But not many than can develop the certain connectivity with the audience.

His accessibility and genuine love of all things dirt make it possible...

Just talk with the man, he'll talk with you till your hearts content. A chat with the man will take you to great restaurant recommendations, great music (He's a devout metal head with a good ear for all sorts of music), and great memories from his past.

"I'd always been interested in public speaking," Andrews said. "I was in the FFA (Future Farmers of America) in high school in a part of upstate New York where there were more cows than people, and I was always a big race fan."

Andrews was bitten by the bug so to speak since age 8 when he took in his first race at Fonda Speedway. But it was actually his older brother that helped connect the dots that led him to the broadcast booth years later.

"One year my older brother John went out and bought at '39 Pontiac, a complete roller ready to go. So he threw an engine in it and decided to go dance with the NY (midstate) Antique Stock Car Club.  One night we were in the pits at Madison County Fairgrounds in Brookfield, NY, and I went up to Carl Carpenter the first president of the club and I told him that I'd had some radio experience and a public speaking background and that I'd like to try my hand at announcing. He told me that they already had a guy, but that he'd keep me in mind. So I went back to our pit area and about an hour and a half later and Carl went looking for me. He said his guy couldn't make it and asked if I was still interested, and the rest as they say.....is history."

One great truth in any business is, you never know who's watching and taking notice on any particular night and how it will impact your future. It didn't take long for Andrews to become noticed. 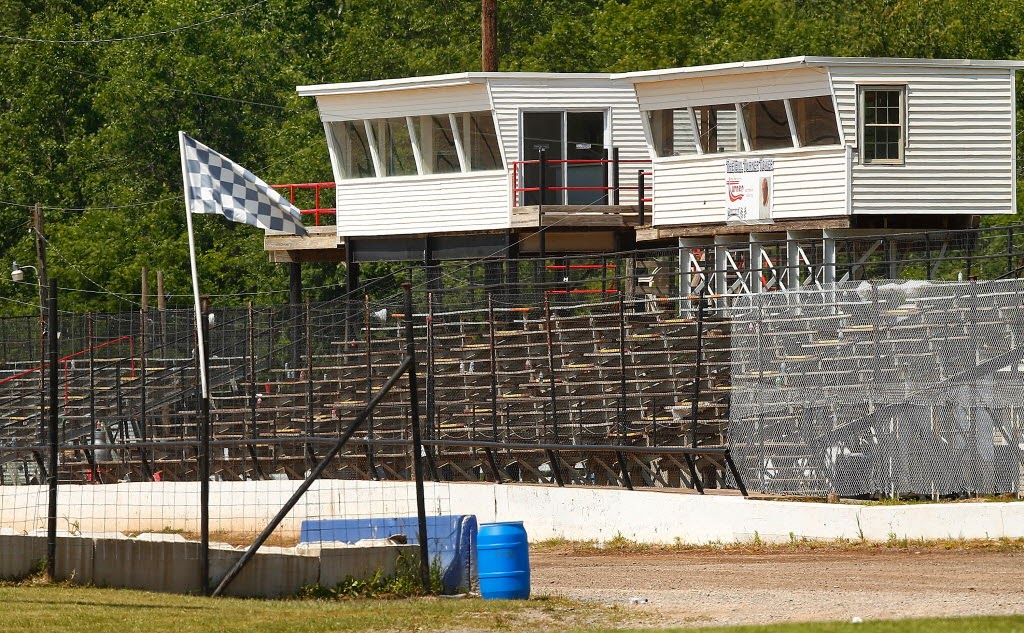 "I was working at Afton Speedway one night and Marcia Wetmore who was the general manager of Utica-Rome  and Fulton Speedways at the time, and Dick Sweet who was the head starter there had caught my gig there and told me that he had somebody that I could use some advice from. He said. "you're good, but you can always be better." and they put me in touch with Jim King, the Utica/Rome and Fulton announcer at that time. And so away we went and I spent a couple of years there with Jim and he passed on some great things to me."

King passed on three things that Andrews remembers to this day. "He told me number one, like what you do.  Number two, never forget there is always somebody out there that knows more than you do, and number three, never be afraid to be yourself. This is entertainment, and we're in the entertainment business."

Andrews heeded the advice. He truly loves what he does, is always striving to get better, and seeks to entertain first and foremost. In fact if you're in the stands with Andrews on the mic, the night tends to take on the warm feel of a conversation, punctuated with comedy, and garnished with original "Andrewsisms" such as; "Up where grandma hides the vodka!" used when a driver is on the edge of the cushion.

Sure, every announcer has those in their repertoire, but Andrews expressions and mannerisms have developed a certain resonance with his audience and it's one that would be impossible for many others to achieve. It helps that he's a man of the people and has never let his success take his focus off of his audience and what they love about him.

"I think the biggest thing is that I'm a race fan myself. It's what I am first and foremost. I just happen to get paid to talk about the race and have the third best seat in the house. The first seat being the drivers, and the second best, the flagman, which in most cases is the legendary Dave Farney. I appreciate the fans and understand what they're going through. I don't want to sit through a long show, I don't want sit though a lot of BS, I don't want to be bored, I want to be entertained. So I appreciate where the fans are coming from. You take the microphone away from me, and I'm just a race fan that loves going to the races and I love to interact with people. My mom gave me a some great advice years ago.   When she said, The way a man is judged is how he treats people that can do nothing for him. And that stays with me because I have to deal with people that are there just once a week, and I have to deal with owners of businesses and I treat everyone with the utmost respect no matter who they are. It could be a person who had to scrimp and save to afford the races or a C.E.O. and they're just the same to me."

Andrews is more than just a torchbearer for the modifieds. His body of work brought him to the ears of people across divisions, and even to television. He was selected to join the broadcast teams at events such as the World 100, Firecracker 100, and the World Finals in addition to his duties at Super Dirt Week.

"There are so many more crown jewel events in late model racing than with the modifieds and the fan base is somewhat different. I had to bring my A-Game from the modifieds over to the late models because there's so many more that you have to know and so much more that you have to know about them as drivers. You have to be up to date on these guys as much as possible so it challenges me to make myself more knowledgeable."

But as much as Andrews revels in the homework on a different set of drivers, he appreciates the atmosphere at the crown jewels as much as the racing.

"To be able to work these big late model shows makes me feel like a kid in a candy store, I love it! I love to be around the campfires at these events and talk to the people, we're all race fans and we're all there to have a good time and everybody's friendly. Somebody sees you carrying a six pack around and before you know it you're at their campsite telling stories until three in the morning. It's awesome!"

The Super DIRTCar series will be starting soon enough (not soon enough for many of us), and Andrews will be there to call the action. He's excited about the prospect of new faces on the tour full time, tracks the tour hasn't visited in quite some time, and the fans he'll get to talk to.

He makes cases for every driver that plans on running the tour, and their chances of winning with equal fervor and talks about Erick Rudolph and his breakout season and the re emergence of Tim Fuller on the tour full time. One gets the impression that he not only can't wait to call the action, but can't wait to catch up on everyone's offseason, and chat it up in the pits come spring.

From a microphone standpoint, the modifieds are in great hands, but more than that, they're enjoying a strong period of high demand, and the fans are held together with Andrews helping to keep them connected.

So what does the future bring for Shane Andrews, we're not sure. Is it a place with MRN someday? Is it going on the road filling in for Bum Carlos with the band Cheap Trick? It's hard to say, but for now, Andrews is completely content.

"I enjoy announcing and still want to announce. I enjoy doing the TV side, I wish there were a few more opportunities to do more dirt track stuff. The future depends on what flows my way. But right now, the future's too far away from me, in the present I love what I'm doing."