Dirt related tidbits from the weekend that was adorn our Weekend Notebook Page, it was a sad one though as Shane Unger was tragically taken from us. But racing still goes on and there were some noteworthy announcements and interesting developments, so let's take a look...

As a dirt nation, we all know what can happen any time at the races. And sadly on Saturday night, the worst did happen as Shane Unger tragically lost his life in an accident at the World 100. Now is not the time to assign blame, but rather a time to grieve. And though Unger was relatively unknown outside of his geography, the stories coming out of the area indicated that he was a true family man and a delightful human being that loved racing. The sort of individual that the sport is built around and made up of, by all accounts, embodied all that we love, and touched the lives of many as evidenced by a heartfelt memorial made from fans in attendance at the site of the accident. 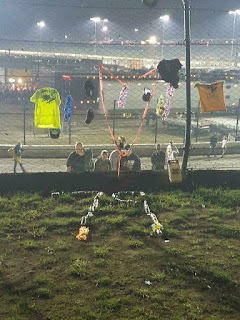 There is no bright side to any driver fatality of course. Some may point to the learning that may follow and be passed on to safety engineers to help make the sport a little less dangerous. But it will always involve this risk. For now, it just hurts to have one more great person with a young family gone forever.

For more on the story here: Shane Unger World 100

The Connecticut Yankee in the Outlaw Court himself, Mr. David Gravel will be part of a one car team going forward as the announcement came yesterday that CBJ Motorsports has secured funding through 2018. The will also part ways amicably with Sammy Swindell who seemed grateful for the opportunity in the press release. What does it mean? It means Gravel will continue to develop and stay in excellent equipment which could be scary for everyone else. Already a fixture in the top of our National Sprint Car Poll Standings, the young driver will have a fantastic opportunity to start the year off in February with a legitimate chance of challenging Donny Schatz for the title. We're not sure how that will go, but it will be fun to find out.

Gravel took some time to get comfortable in his new surroundings with CBJ earlier this year, but as the season has gone along, he's been better every week and has become a fixture in victory lane a personal best nine times in 2016 with the majority of them coming weekly.

Pierce Has Arrived; Now What?

Bobby Pierce took his second Super Late Model crown jewel in less than a month at Eldora Saturday night. The 19 year old driver became the youngest in the history of the event to do so and combined with his recent late model success, which also includes two UMP Summernationals championships as well, and podium finishes at Nascar's Mud Summer Classic at Eldora.

It's hard to say what's next in store for Pierce, but he stands the potential to be a complete game changer in the world of dirt late models. He has arrived, and his next major announcement about any future plans will be as closely watched as almost anybody's this coming off season.

For everything you may have missed from the weekend that was at Eldora, check out this comprehensive World 100 coverage at a glance page from our friends at DirtOnDirt.com.  Not a subscriber? Get one, it's cheap and awesome! What the hell are you waiting for?


Price Miller To Sub for McMahan:

Paul McMahan is sore. Not at anybody in particular, but altogether sore following a tumble in recent World of Outlaw action. McMahan will take to the sidelines for a brief respite which opens the door for one Parker Price Miller to take the wheel of the #7 Destiny Motorsports ride for the short term until McMahan heals completely. It will be interesting to see if the young Indiana driver who has opened eyes across the country the last two seasons with some glimpses of potential against stout competiton in the USAC and ASCoC ranks.

You can check out the full press release here: Destiny Motorsports Press Release

Oswego Gets Ready To Get Dirty:

Super DIRT Week is getting ready for a new beginning at the legendary Oswego Speedway. The new 300 lap race around the 5/8 mile oval will be as unpredictable as you could possibly imagine with track conditions that lead to interesting expectations.  Will Oswego be ready for dirt racing's biggest party? It looks that way as facility improvements are already underway to facility the needs of the event.

Read more about what's going to happen here from our friends at Dirt Track Digest.

New Renovation Projects Being Completed Daily at the Oswego Speedway

Lots of racing to be seen in our neck of the woods with Sharon Speedway hosting it's annual Applefest two day show, Roaring Knob playing host to the annual Big Kahuna featuring Super Late Models, and Bedford, Williams Grove and Lincoln Speedway's all in action.  Pick a race and go, we've got a great list of them on our TDN Guide to the Postseason Page